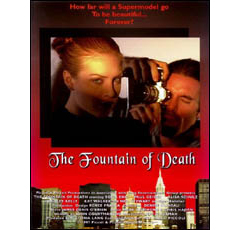 THE FOUNTAIN OF DEATH

On a remote Long Island beach under a full moon, a young model has become the unfortunate victim of a cult ceremony. Drugged and held captive, she is forced to suffer a horrific ritual: the extraction of her spinal fluid — which becomes a nourishing beverage for the mysterious leader of the cult, a figure whose identity remains unknown until the final scene. So begins THE FOUNTAIN OF DEATH, a modern thriller set in New York City’s glamorous modeling world. The story draws on age-old legends of the Fountain of Youth and the life-sustaining essence of young, beautiful women. When innocent models start disappearing, Detectives Jerry Valor and Kate Evens are cast out of their element and into a hostile world of wealth, beauty and power. Their suspects? Clark Reed, the infamously sleazy fashion photographer; Carmela, a popular psychic frequented by New York’s top actors and models; and the rich and powerful Dory Gray, the modeling agency’s vain, neurotic President. No one is above suspicion… Complicating the investigation is Kate’s attraction to her partner Jerry, which erupts in jealousy when Jerry falls under the spell of the agency’s Supermodel, Alexia, and risks more than the investigation. In a final, climactic ritual ceremony, Kate must save the next cult victim, as well as her partner, from the dismal fate of THE FOUNTAIN OF DEATH.

Director Jeff Glickman has directed plays at The New York Shakespeare Festival, The Williamstown Theater Festival, The Harold Clurman Theater, The West Bank Café, and The Actor’s Studio. He wrote and directed “Leaves,” which premiered at Samuel Beckett Theatre in New York. Glickman has written a stage adaptation of stories by Raymond Carver and of Galway Kinnell’s poem, “The Book of Nightmares.” His documentary film, TOMPKINS SQUARE, was shown at The Museum of the Moving Image in New York. Glickman has worked as an art director and set decorator in feature films and television, and spent a year producing and directing an all product videography for Q2, the sister station of QVC.

While the Artistic Director of Hudson/Spring, a theatre collective in New York City, Glickman taught classes in performance techniques and text analysis as well as producing and directing “The Taming of the Shrew” and “The Three Sisters.” For three years Jeff served as Director of Project Development for Broadway producer, Zev Bufman. He holds a B.A. from Temple University and attended Circle In The Square Theater School, NYU and Oxford University.

Ms. Lang served as Senior Vice President and Director of the Broadcast Department at the Rowland Company, a division of Saatchi and Saatchi. There, she worked within the company to develop innovative broadcasting concepts such as sponsored entertainment, educational programming and infomercials. Additionally at Rowland, she supervised network and local placement activity, satellite and video news release production and distribution. Ms. Lang has worked with Lorimar/Warner Brothers Television, Saban Entertainment, Fox Broadcasting, and Stephen J. Cannell Productions on program development, served as Production Executive for Elizabeth Taylor/Zev Bufman Productions, Media Coordinator for American Cinema Releasing, and Talent Coordinator for Guber-Gross Productions, producing stage shows with the brightest names in the music and comedy arenas.

In 1993 she formed the Lang Entertainment Group, Inc. to develop and produce television and home video entertainment. In 1995 Ms. Lang joined with Pier P. Piccoli to form PLus Films, Inc., an independent film production company focusing on commercial features. In addition, they created PLus Media, Inc. to develop and produce lifestyle programming for national and local television. Ms. Lang is a member of New York Women in Film and Television, the Independent Feature Project, the British Academy of Film & Television, the National Association of Television Programming Executives, the Academy of Television Arts & Sciences, the International Radio and Television Society, the Drama Desk Association, Who’s Who in Entertainment, Who’s Who in American Professionals and Who’s Who in American Women, and has served as a judge for the Long Island Film Festival, the Emmy Awards, the FilmMakers.com screenwriting competition and the International Film and Television Festival of New York. She attended Emerson College and is a summa cum laude graduate of Long Island University.

Piccoli’s first venture into filmmaking was with film school chum, Matthew Harrison. He served as Associate Producer on the highly acclaimed film RHYTHM THIEF. In 1995 he formed Piccoli & Piccoli Productions, Inc. to develop, produce and distribute feature films, television and home video projects. Its mandate included the establishment of an entertainment product library. In 1995 he merged the company with Victoria Lang to form PLus Films, Inc. Pier Paolo Piccoli brings an unusual blend of creativity and business savvy to the motion picture industry. His TV marketing and production company specializes in lifestyle programming for local and network television. Piccoli & Piccoli Media Marketing Enterprises was one of the first promotional TV packaging companies to use satellite technology. Piccoli earned a doctorate in Business & Marketing from the University of Genoa, Italy and attended film school at New York University.