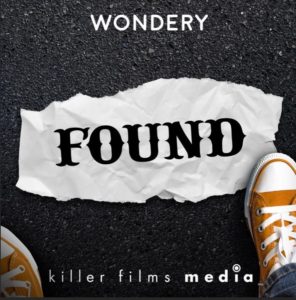 In June 2016, FOUND, a new musical and Killer Films Media in partnership with Wondery announced the launch of the FOUND podcast series and app.

The FOUND podcast series explores personal stories of love, loss, hope, transformation and aspiration through the lens of lost and found notes combined with the power of humor and music. The FOUND app features notes from the podcast, giving users a way to track them on a global map, pin finds to a timeline, invite friends to help piece the FOUND mysteries together, share inspirational notes on social media and upload new notes for consideration.

The FOUND podcast series and the FOUND app are the next installations in a franchise conceived and created by Emmy Award-winning filmmaker and “This American Life” contributor Davy Rothbart.

Rothbart, who hosts the series with co-host Christina Anthony, launched the FOUND brand in 2001 when he stumbled upon a note meant for a cheating boyfriend that had been mistakenly placed on the windshield of his car.  This launch marks the 16-year anniversary for FOUND Magazine.

“I started FOUND as a D.I.Y. community art project — a simple way for people with natural curiosity and a sense of wonder to share the fascinating notes, letters, and photos they’d found with one another. It’s been absolutely thrilling to see the way the project has exploded over the years, to books, tours, even a musical, and to discover so many kindred spirits who share my interest in other people’s lives,” said Rothbart. “I couldn’t be more excited to launch theFOUND Podcast, which twines my passions for radio storytelling with my love of found objects. Thanks for listening!”

Over the last two decades, FOUND has evolved from a magazine publication that inspired a cult following, to threeNew York Times best-selling books, a hit Off Broadway world premiere musical and television and radio segments on “Late Night with David Letterman,” “This American Life” and “20/20”.

The acclaimed stage production FOUND, the musical from creators Hunter Bell, Lee Overtree and Eli Bolin, which inspired the podcast and app, recently hit the stage again with the critically-acclaimed Philadelphia Theatre Company’s production, marking the first time a podcast and an app have been produced in concert with a musical.

“Since discovering Davy Rothbart’s grassroots storytelling, it’s been a remarkable journey ushering it from the pages of a magazine to the musical stage. When Killer described a podcast/app brand extension, my partners Benjamin Salka, Eva Price and I knew this was a natural next step in bringing it to a wider audience,” said Victoria Lang, a producer for FOUND, the musical. “We are excited to connect with a larger community to explore the endless supply of extraordinary stories of ordinary people hidden in plain sight in the world all around us. Who knows… they could wind up in our musical one day.”

“It used to be that content was king. Well now, content is commodity, and great story is the real royalty. FOUND is so much ‘truth is stranger than fiction’ adventure, we could not resist,” said Adrienne Becker, CEO of Killer Content.

For Wondery, a media company specialized in mobile and on-demand audio storytelling, FOUND was its first original series.

“Everybody wants to hear a story – and Wondery was created to fulfill that need. We are proud to partner with Davy, FOUND, the musical and Killer in FOUND, our first original podcast and app,” said Hernan Lopez, founder of Wondery.

Listeners can subscribe to the FOUND podcast on iTunes and Stitcher.  The series is also available on wondery.com/found and Google Play, among others. Full episodes are available every other Wednesday, followed by weekly updates. The format includes a diverse roster of guest hosts and dramatized storytelling.