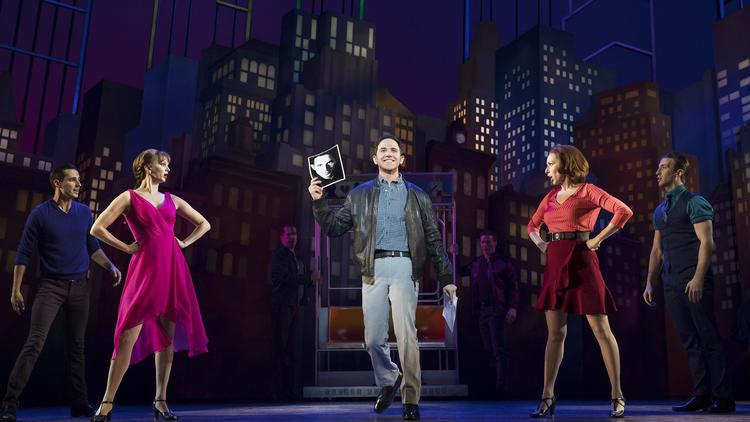 By Chris Jones
The Chicago Tribune

The best moment in “Tootsie,” which opened its pre-Broadway tryout in Chicago on Sunday night, is not when the remarkable Santino Fontana first appears in a dress as Dorothy, the ill-advised creation of an out-of-work actor turned by the relentless cruelty of a rejection-heavy biz into a two-bit, Midtown version of Dr. Frankenstein. It is when Fontana first opens his mouth to sing.

By intermission at the Cadillac Palace Theatre, the lobbies were buzzing with two questions: How does he sound like that? And can he really do that every night of the week?

This bodes very well indeed for the Broadway-bound “Tootsie,” first and foremost because it reveals that the creative team of the composer David Yazbek, the book writer Robert Horn and the director Scott Ellis have figured out the tricky task of how to make the 1982 Sydney Pollock movie titter and totter confidently inside the high heels of a musical.

If you want a hit show, you have to provide an early moment when an audience — content that its hard-earned cash was not spent in vain — is sufficiently impressed that it relaxes, thus opening its collective heart to what is to come, even if that requires a forgiving spirit. Fontana earns that crucial moment for “Tootsie” not just by otherworldly control of the larynx but through stellar, old-fashioned comedic acting, demonstrably rooted in the pain and truth of his out-of-work Michael. By the time he is done, I’ll wager this will go down as a truly great Broadway performance.

Already, “Tootsie” is a very funny show. That’s partly because the situation familiar from the movie — actor pretends to be woman to get a part, only to see the deception spiral further and further out of control as others fall in love with his emasculating creation — is a proven scenario, even when modernized, removed from daytime TV and planted on today’s Broadway on a set from David Rockwell that deftly switches from classic spectacle to the impoverished actor’s reality. But it’s mostly due to Horn’s book, quite an achievement from a writer who never has written a prior book to a major musical.

You’ll be in some standard scene or another, as Michael fends off his Cassandra-like roommate and foil Jeff (Andy Grotelueschen), his wacky actress friend Sandy (Sarah Stiles), his agent Stan (Michael McGrath) or Max (John Behlmann), the smitten, six-packed reality-TV actor who falls in love with Dorothy, and the gag will just be a whole lot funnier than the average joke in these kinds of shows. Stiles’ deliciously bizarre Sandy has a whole mirth-making collection of feline-related humor, the pinnacle of which is her sad-sack description of re-enacting “Dirty Dancing” lifts with her cat (“he just wasn’t very strong”).

And in the key love scene moment when the actress Julie (Lilli Cooper) falls in love with Dorothy and declares a new twist to her hitherto heterosexual orientation, she explains herself by saying, “I know it’s not the package I imagined.”

Fontana lets that linger for a few seconds, staring at the floor.

“It’s so not the package you imagined,” he says, expertly building the laugh to a crescendo.

I’d say much the same, overall, about Yazbek’s score. The sound has a movie-score quality, which feels both like an apt nod to the Hollywood origin of the material and a gently satirical jab at the song stylings of Dave Grusin and the early 1980s. Many of his tempos are arrestingly up — so much so, often so counterintuitively so, that they keep amping the pleasures of the piece.

You really should hear, for example, Yazbek’s Act 1 anticipatory number, right before the show-within-a-show opens. It has exactly the same dramaturgical function of “Opening Night” in “The Producers,” to bring up the show that “Tootsie” most recalls. And in most shows, it would be a throwaway number. But Yazbek gives the whole shebang the most delicious kind of anarchic but heartfelt bounce. That’s true of the smashing opening number, too. Truly, Broadway has no better musical satirist than Yazbek, mostly because musicals never work unless the fun comes from love.

Most of the ballads have oodles of emotional oomph. “Tootsie” is a show about actors, so it is perhaps unsurprising that actors like Cooper do not struggle to sing truthfully about the sacrifices their work requires. Any number of songs in this show will find their way to cabarets; they’ll be sung by those hungry for material that reflects their lives.

The only song that doesn’t work is, inarguably, the most important number of all, an eleven o’clock ditty wherein Michael thanks Dorothy for all that he has learned from her. This weirdly inert power ballad sits like a limp rag — at least by comparison with all the prior brilliance in the richly orchestrated score — and the sag it causes in the show’s most important section actually torpedoes the last 15 minutes, which is where all the major work still needs to happen.

Dorothy’s big reveal as Michael — which you may recall is the most famous scene in the film — is very much a letdown here. It’s rushed and it doesn’t have either the requisite dramatic tension nor the required emotional impact on the other characters. Compared with the level of detail Ellis provides elsewhere — some of the physical comedy is just as fantastic as the emotional logic — it is disappointingly nonspecific. All of a sudden, a hugely enjoyable show becomes a bore.

It’s hardly unusual for tryouts to run out of time, and with a better song and more directorial attention to the conclusion, we’re more likely to be cooking with gas when Michael ditches the false eyelashes. It would further help if Cooper ups the personality quotient: We have to believe that Michael will be happy, given his proven propensity to make others miserable. And I’d also deepen the show’s antagonist, the director Ron Carlisle (Reg Rogers), so far too much of a paper tiger.

Still, “Tootsie” gets so very much right. It’s by far the best of this recent crop of Chicago tryouts: I’ve surely never seen a musical comedy so deliciously lampoon the familiar tropes of Broadway choreography (choreographer Denis Jones has both guts and self-awareness) and, by being so palpably warmhearted, it avoids causing any offense in an era much changed from 1982. No easy feat, that.

In fact, Ellis lets his comic actors build characters as outlandishly successful as I have seen since Ulla Inga Hansen Benson Yansen Tallen Hallen Svaden Swanson of “The Producers” once roamed this very stage and Mel Brooks danced on the tables at Petterino’s restaurant. It’s good to finish the work and have a hit.

Chris Jones is a Tribune critic.